A new study in PLOS ONE shows how ancient humans in the Middle East made and used sophisticated fishing tackle as early as 10,000 BC. With these fishing tools, they hunted ancient aquatic monsters, including giant carp.

Understanding the development vector of fishing in the ancient world is fraught with pitfalls. To begin with, it is even difficult to define exactly what “fishing” is. However, in this case, we have to assume that fishing is more than reaching a stream full of fish and ‘cuddling’ one with your hands, and involving the use of bespoke tools. (fishing tackle).

Some of the fishing tackle found at the Hula Valley site in northern Israel. (Professor Gonen Sharon /Tel Hai College/ PLOS ONE )

With few exceptions, wooden rods, fine lines of animal hair, and organic lures and baits have all rotted away in the environments in which they have been left. However, the recent PLOS ONE study is based on the discovery of a collection of ancient fishing tackle made near the Jordan River in the Hula Valley, northern Israel. And this fishing tackle set represents the holy grail of the angling world. 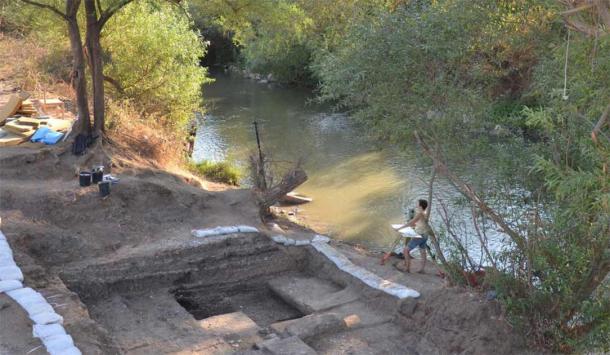 The team, led by Antonella Pedergnana from the Römisch-Germanisches Zentralmuseum archaeological research institute in Germany, analyzed a rare hoard of “19 bone hooks and six grooved stones”. According to an article by Scientific orientation these carefully grooved stones served as weights.

Together, as slim as the collection may seem, these ancient life-saving devices constitute the “largest collection ever discovered of ancient fishing technology”. Because of this, the researchers were able to extend their speculation to some of the actual fishing techniques that were deployed in the waterways around 12,000 years ago.

Ask a fisherman to describe a hook and he will immediately ask you “for what species of fish?” Then, once the fish has been identified, the fisherman will have to ask you “where” to catch the fish?

Fishermen have several types of hooks for each species in a given environment. So it’s perhaps no surprise that Professor Sharon said the old collection contained an “enormous variety of hooks”. In fact, the researchers found that “no two hooks are alike”, in that each was different in size and style. It was concluded that this variability alone highlights “the excellent knowledge these people had of fish behavior”.

Fishing is one thing, but these people also attracted

Professor Gonen Sharon of Tel-Hai College, Israel, said Jerusalem Post that ancient hooks “are strikingly similar to modern hooks”. The scientist was not just referring to the apparent ‘dexterity’ seen in their overall construction, or the size of the hooks, but the study shows that they were all carefully ‘barbed’ with tiny backward-facing tips.

This feature ensured that the hooks were trapped inside the fish’s jaws so that they could not escape when pulled inward while spinning on the hooked line. Professor Gonen Sharon described this outer lower barb as a “point of no return preventing the fish from escaping from the hook”.

We’re not talking fine hooks here, these delicate hooks are designed to catch brown trout in gentle chalk streams. On the contrary, the fish bones discovered at the Hula Lake site include “giant carp measuring more than 2 meters in length”, according to the study.

Also, unlike most modern hooks which have metal loops to hold the lines, this older collection did not have holes drilled, but rather, they had “sophisticated and diverse methods of attaching the line to the hook using” sophisticated grooves, bulges and knots, and even the use of glue,” the scientists wrote. In addition, residues of vegetable fibers taken from the bends of the hooks indicate that the fishermen were manufacturing and fishing with artificial lures. 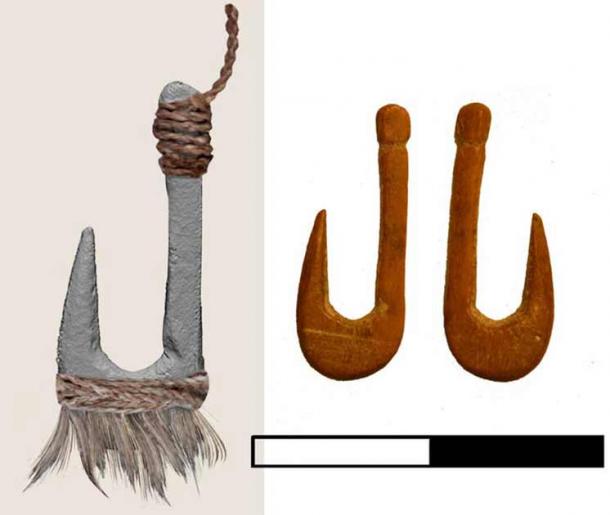 What a complete hook and lure would have looked like. ( Professor Gonen Sharon ,Tel Hai College / PLOS ONE )

A rare toolkit from a transitional era

The advanced fishing technologies depicted in Israel’s Ancient Fishing Tackle Bag originated at the start of the Neolithic Revolution. Around this time, disparate groups of hunters began to settle in traditional hunting stations, which required a constant supply of food. At first, with regular failed harvests, fishing was an essential survival function at this transitional stage from hunting to farming.

Prof Sharon said in the new study that ancient anglers needed to know ‘some species of fish hunt by attacking insects near the surface of the water and will attack an artificial sting that pretends to be a fly’. This use of “fly fishing,” the researcher said, indicates that around 11,000 BC, people in the Middle East “had complete and extensive knowledge of fish behavior around Lake Hula.” And Hula Valley fishing tools show that this knowledge was in full swing by 12,000 BC, as do their custom-made wooden fishing rods, most of which have disappeared into the soils of time.