A cormorant river fisherman had his tongue tied after taking fishing tackle for his live prey. Footage of the amazing bird was captured swimming in Castle Mill Stream on the Oxford Canal.

An amateur photographer, who works as a porter at nearby John Radcliffe Hospital in Oxford, was in the right place at the right time with his camera when he snapped pictures of the bird earlier this week.

Antony Steele, 57, took the photos of the native bird near his home in Jericho. Cormorants usually eat fish, so it’s no surprise that this bird was fooled by the bait it caught.

Adult birds eat an average of one pound of fish per day, which consists of small fish, usually less than six inches. They are opportunistic feeders, feeding on many species of fish, but focusing on those that are easiest to catch. 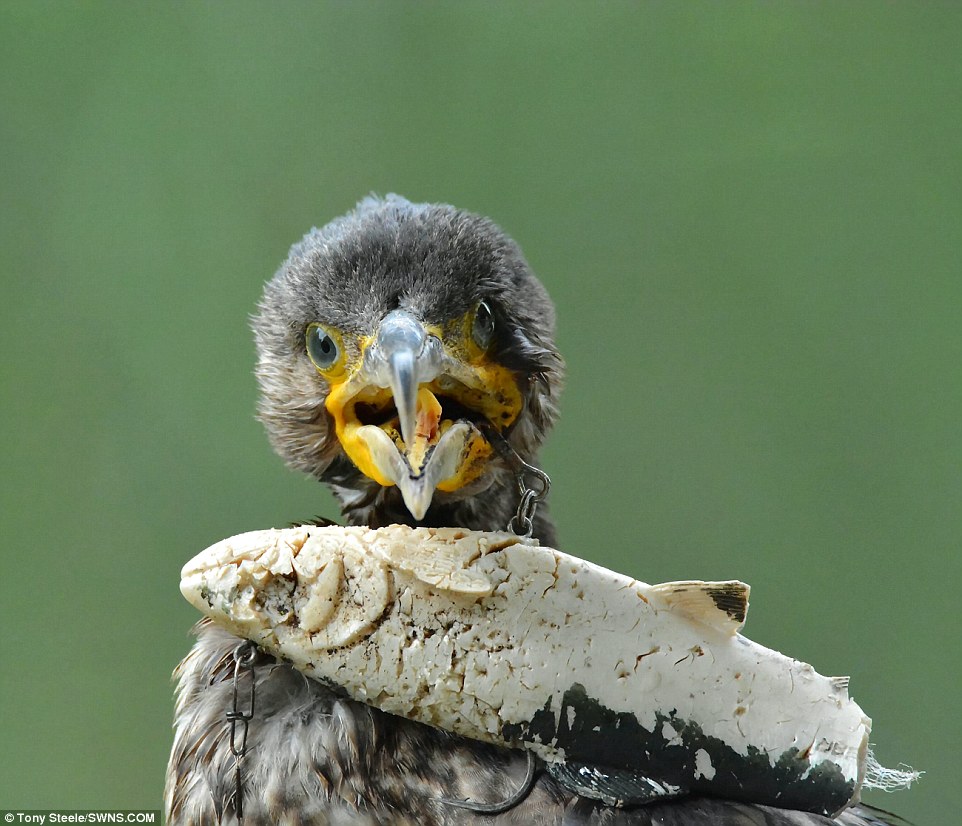 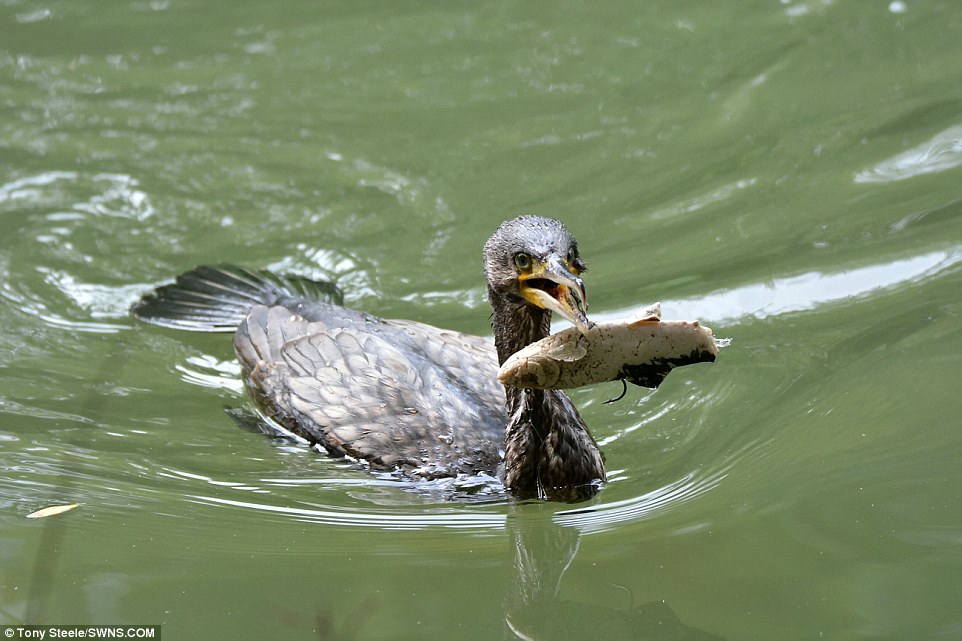 Is it time for a swim? The beautiful cormorant slipped through the water despite the bait stuck in its mouth

The birds usually nest in colonies around the shore, on trees, islets or cliffs. They are generally coastal rather than oceanic birds, but the bird has become a common sight along UK inland lakes, reservoirs and rivers.

Cormorants are social birds and inhabit rocky and sandy coastlines which include sheltered shores, bays, harbours, marinas and estuaries as well as freshwater lakes, ponds, gravel pits, reservoirs and rivers further inland. They prefer shallow, sheltered areas in both freshwater and saltwater environments.

Cormorants are surprisingly large and have facial features that could be described as reptilian. Their long necks and hooked beaks give them a primitive and superior appearance. This is reinforced by their tendency to stand on top of rocks, poles or trees with their wings outstretched to either side. 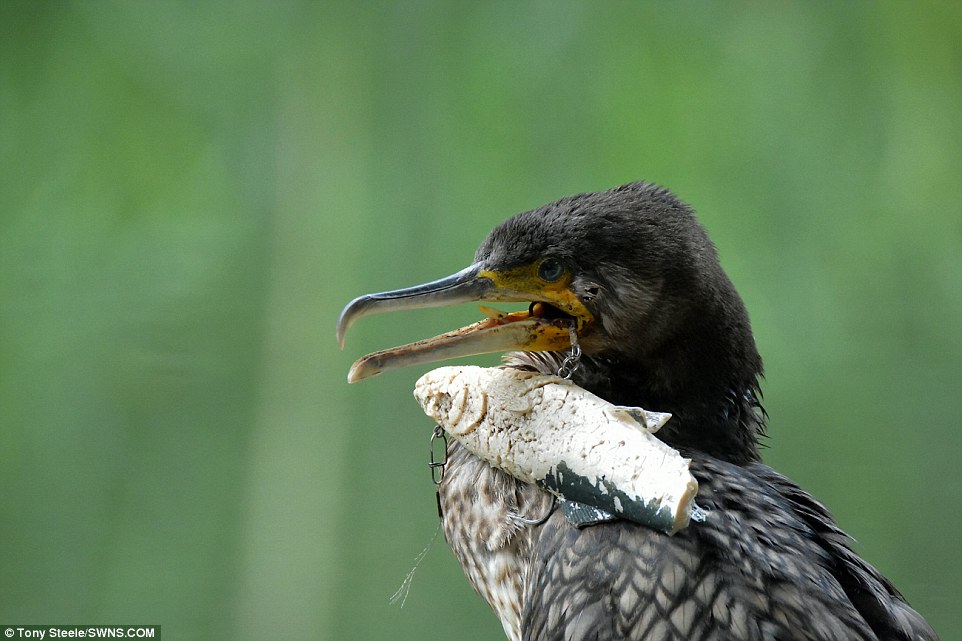 The birds generally nest in colonies around the shore, on trees, islets or cliffs and are generally coastal rather than oceanic.

Over the past 30 years the UK has seen a substantial increase in the total number of cormorants found on coasts and estuaries and it is now widely recognized that large numbers of cormorants establish colonies in the South West, the Midlands and East Anglia.

However, the Canal and River Trust has reported that anglers are concerned that the exceptional fishing ability of the cormorants could plunge into an already depleted number of fish stocks.

But with the bird’s average lifespan being around 25 years, anglers will have to get used to the birds taking a cut of their daily catch. 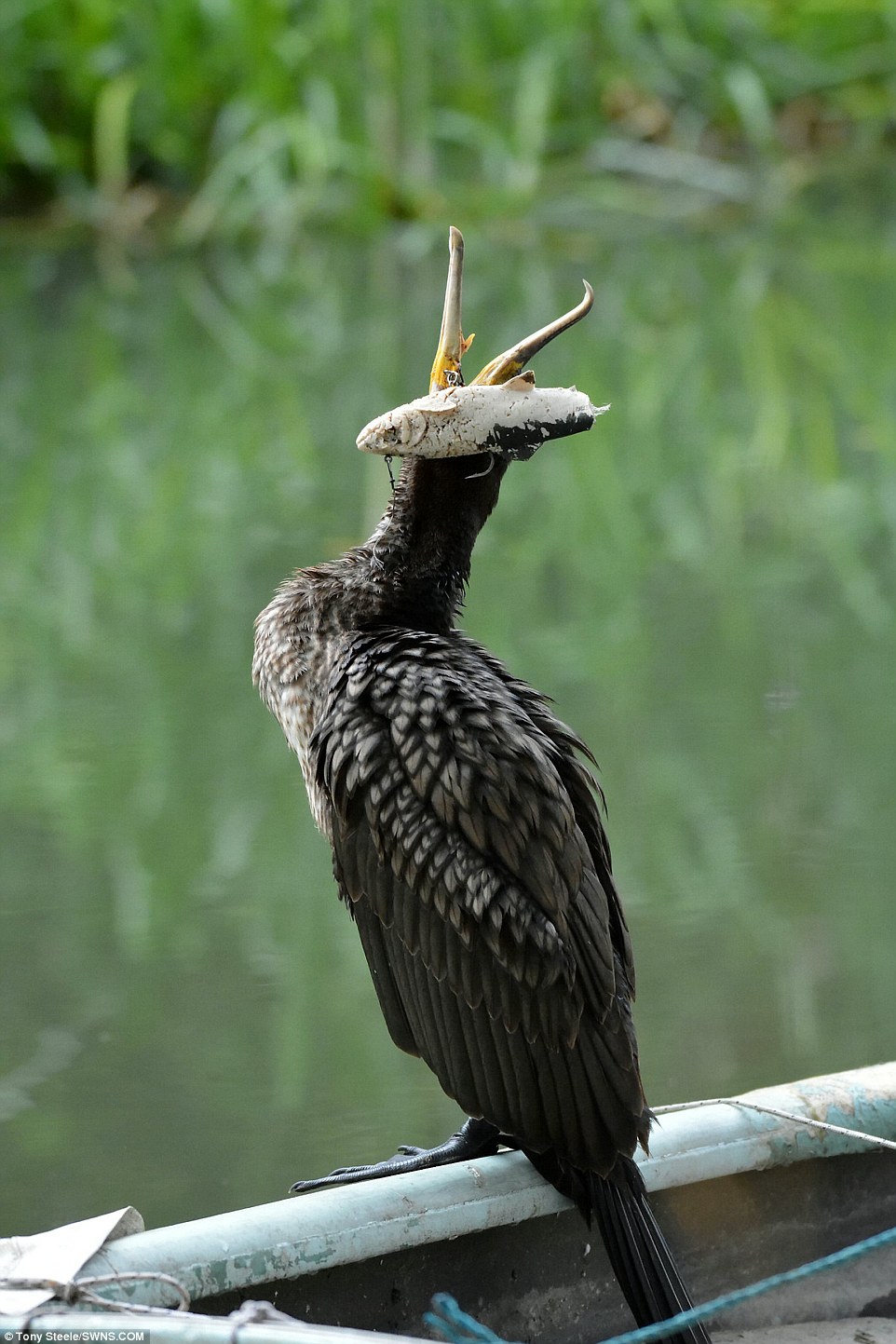 Cormorants can often be found perched on tall objects, adding to the birds an already superior appearance

Deep and offshore waters are generally avoided by birds and breeding takes place on coastal areas.

Male and female cormorants look alike, while males are longer and heavier. The plumage is black with green and purple highlights that give it a scale-like appearance.

There are long white streaks on the crown, a conspicuous white patch on the throat, and they develop white patches on the thighs in summer.

The plumage is duller in winter when it lacks white on the thighs, throat and head and the face is yellow. Immature birds resemble adults but are browner with varying amounts of white on the underparts.